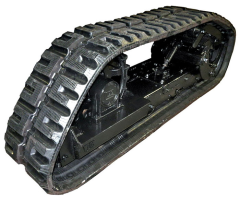 TRACTION HAS A NEW SHAPE.

The VTS - Versatile Track System® is a complete rubber track undercarriage that bolts directly to your skid steer's standard hubs. VTS® utilizes forward placement of the front idler wheel to maintain flotation as well as added stability. By placing the front idler significantly ahead of the front hub position, VTS gains unmatched stability when digging and backing out of trenches as well as hauling and dumping heavy loads. VTS tracks provide bi-directional suspension which adjusts independently from one side of the machine to the other. The suspension automatically applies the track undercarriages back to the ground maximizing track foot print, evenly distributing horsepower and improving machine stability on uneven terrain.

In addition to increased traction and flotation, the rear idler positions the track underneath the ballast of the machine. By placing the rear idler farther back than the rear hub position, VTS gains unmatched stability when grading up inclines as well as traversing on side hills. Convert your wheeled skid loader to a track loader in under an hour. If you want incredible traction, better stability and a smoother ride, simply remove the tires from you skid loader and bolt on VTS today!